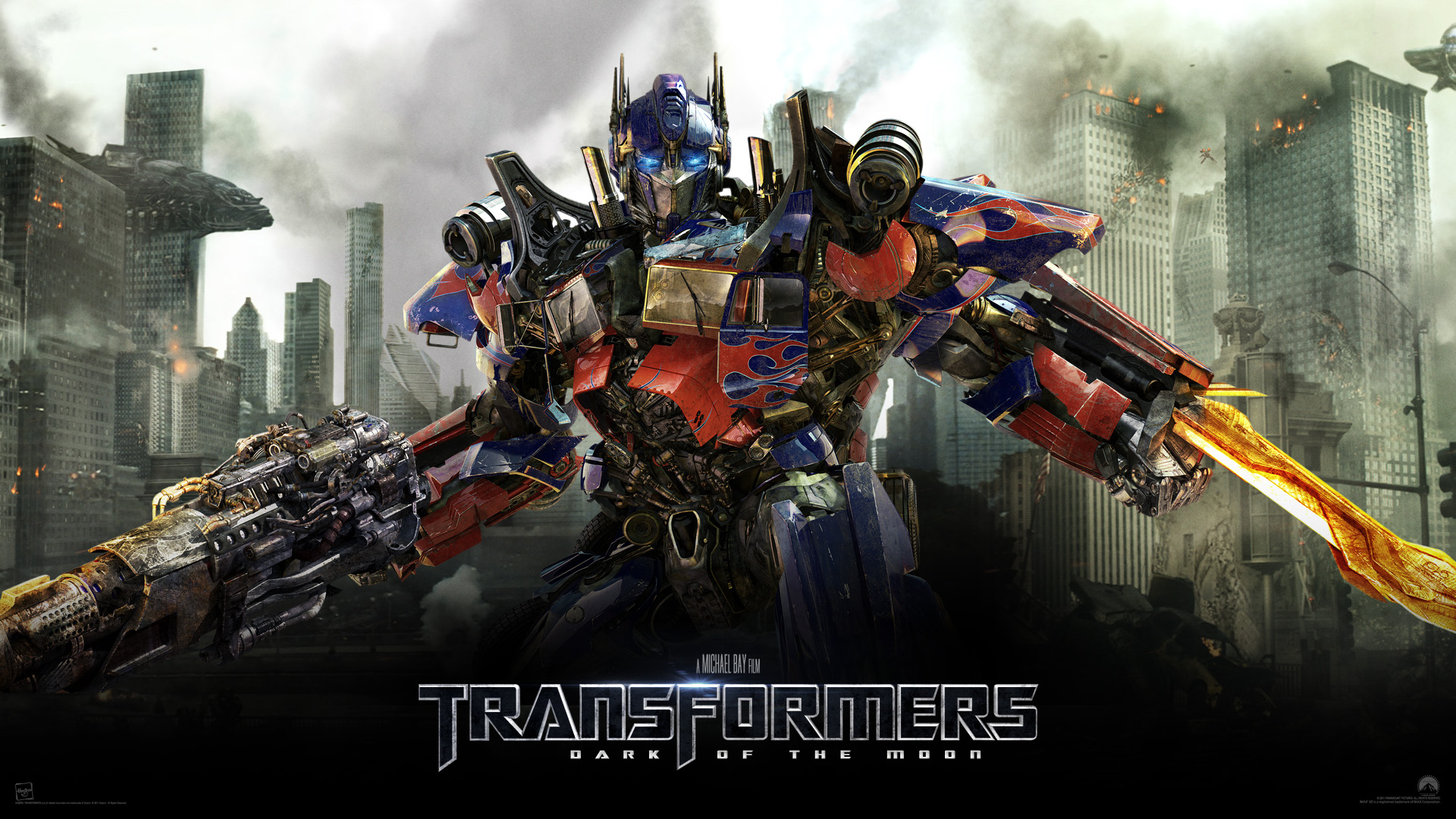 Seeing as I’ve already dealt with Revenge of the Fallen and Age of Extinction, as well as explaining why I think the original 2007 Transformers movie was pretty good and doesn’t really need to be fixed, I’ll now complete the quadrology and take a look at Dark of the Moon.

After even Michael Bay admitted that Revenge of the Fallen had quite a few problems, he promised everything would be better for Dark of the Moon. Better story, more focus on the Transformers, and absolutely no trace of the twins Mudflap and Skids, who were horrible stereotypes of – depending on who you ask – either black ghetto gangstas or white wanna-be gangstas. Bay even promised a reward to anyone who could spot them in the movie. They actually did appear, though in car form only and I don’t think Bay actually paid out said reward to anyone.

Anyway, Dark of the Moon was supposed to be better than Revenge of the Fallen in every way. As it turns out it was better in some minor ways, but overall it was still the same kind of cinematic mess Michael Bay has since become famous for. Dark of the Moon did have a plot… somewhat, and actually did have a few nice character moments that actually involved the Transformers. It also had, of course, many, many explosions, a violence level that only made it past the censors because it doesn’t involve humans but rather very human-like robots, and something we never believed possible: a female lead that was a worse actress than Megan Fox.

So here is how I would have done Dark of the Moon. Same basic premise as before: studio and Hasbro have laid down the law on which characters must appear and the basic storyline, plus we need to end up in a similar place as the original movie so as to set up Age of Extinction. Here we go. As America celebrates the launch of Apollo 11, Sector 7 does its own moon shot with technology scavenged from Megatron. It was supposed to be a mere test, but the astronauts discover the Ark crashed on the dark side of moon. Inspecting the wreckage, they find lots of dead Transformers. Lacking cargo capacity, the astronauts only take a few samples of the tech back home with them. Sector 7 figures they’ve got a perfectly preserved piece of Cybertronian tech in Megatron, so they don’t really need to invest into recovering the Ark.

In the present Sam and Mikaela live in Washington DC. Mikaela works for Dylan Gould, managing his vast collection of cars, while Sam works for NEST as a civilian expert on the Cybertronians, being groomed to take over for Agent Simmons once he retires. The two are still going through the vast archives left behind by Sector 7, wondering whether there are other surprises waiting there (like stasis-locked Jetfire in the previous movie – my version of it). In the process they find what Sector 7 salvaged from the moon in 1969, a couple of pillars. Involving Ratchet, the Autobot identifies the technology as bearing the signatures of his old friend Que as well as Optimus’ predecessor Sentinel Prime, who were lost on the Ark ages ago. Learning that the Ark crashed on the moon, Optimus immediately wants to head there to check it out.

Taking the space craft of the recently arrived Wreckers to the moon, the Autobots discover that the Decepticons have set up a base near the crashed Ark. Autobot spy Wheelie scouts ahead and sees that three surviving Autobots have apparently been recovered from the crash, Sentinel Prime, Que, and Brains. Sneaking in, the Autobots liberate the three prisoners. Upon leaving they are discovered and a brief firefight ensues, but the Autobots get away clean, Optimus remarking that this was almost too easy. Soundwave reports to Megatron that the prisoners have escaped. Megatron nods, satisfied. Everything is proceeding according to plan. Sentinel Prime, having been repaired by Ratchet, gives exposition. He and Que had developed a space bridge, hoping to use it to bring badly needed resources to Cybertron and revitalize the war-torn planet. Only the Ark was shot down and they crashed. When the Decepticons revived them, they wanted to force them to make the space bridge work, but the most important component was missing, the control pillar. It was among those Sector 7 took with them in 1969. Sentinel wants to recover the other pillars from the Decepticons, but the human commanders of NEST would rather see the technology destroyed than let it fall into the wrong hands. Optimus considers, while Sentinel is rather put out about how much Optimus defers to the humans.

Meanwhile Mikaela accidentally discovers that one of the cars in Gould’s collection is a Decepticon and wants to warn Sam and NEST, but is captured by Gould. He collaborates with the Decepticons. When Mikaela asks why, he just gets a vacant look in his eyes. Some time later Sam and NEST get a call from Mikaela, telling them about Decepticons hiding in Gould’s car park, and the Autobots mobilize. It’s a diversion, though. As most of the Autobots are away, the Decepticons attack NEST headquarters. As Ironhide tries to hold them off, Sentinel Prime reveals his true colors and shoots the Autobot in the back, killing him. He expositions that he is sorry about this, but he can’t allow Prime’s concerns for primitive lower life forms to stand in the way of revitalizing Cybertron.

As Optimus and company return to base, everything is in shambles. They quickly follow the Decepticons and Sentinel Prime to Chicago, who have set up shop in a sky scraper belonging to Dylan Gould. The Nemesis arrives from the moon, unloading Decepticon troops to secure the city. The bad guys are preparing to open a huge space bridge portal. Optimus and the Autobots fight their way through and Optimus reaches the top of the skyscraper just in time to see Sentinel activate the portal. Optimus wants to shut it off, but Sentinel tells him that Cybertron is now already in transit and would be destroyed if Optimus shuts it off. Is he willing to destroy their home world for the sake of the humans. Optimus hesitates, which gives Megatron time to arrive on the scene and shoot him in the back, sending him toppling off the skyscraper. Cybertron arrives in the solar system through the space bridge, being positioned in the same orbit as Earth. The much larger planet’s gravity immediately starts to affect the Earth, causing all sorts of natural disasters. Sam and Mikaela watch the calamity, but Mikaela seems strangely unconcerned. When Sam questions her about her role in luring the Autobots into a distraction earlier, she knocks him unconscious.

Optimus comes back online, finding himself a prisoner of Megatron and Sentinel Prime along with Sam. Megatron gloats, explaining that Soundwave has perfected a technology called ‘Cerebro Shells’, which they have used to take over scores of human beings all over the world, including business mogul Dylan Gould and Mikaela as well now. Over the last two years huge facilities have been set up to harness the unleashed energy of having Cybertron this close to Earth. Within a few days the disasters will wipe out humanity and shortly later the planet will be torn apart. By then they will be back on Cybertron with enough energy and raw materials (the remains of the Earth) to rebuild the planet and make it the capital of a Decepticon Empire. Optimus wants to know why Sentinel is part of this, who only replies that he is loyal to Cybertron first and only and that this is the only way to save their world. If Earth has to die for it, so be it.

The Autobots are regrouping on the outskirts of Chicago, though, and a huge NEST / Autobot assault begins. Under the cover of the battle Wheelie, Que, and Brains sneak into the city. Coming across one of the human workers controlled by the Decepticons, Que figures out the functionality of the chips and constructs a disruptor. Mikaela and Dylan Gould come back to their senses. Gould snaps and starts firing ineffectively at the Decepticons with a handgun, but this serves as a distraction for Mikaela, who manages to free Optimus Prime and Sam.

Big end of movie fight ensues. Autobots and NEST battle Decepticons (led by Shockwave) in the city. Sam and Mikaela flee as the skyscraper begins to collapse. Optimus battles Megatron while at the same time trying to appeal to Sentinel, who seems torn about whom to help. Que and Brains arrive, Que pleading with Sentinel to help him reopen the space bridge to send Cybertron back. Does Sentinel really want to rebuild Cybertron at the expense of everything they used to believe in? But Sentinel snaps, attacking Que. The four larger Transformers battle back and forth, giving Brains the opportunity to access the space bridge controls. Sentinel tries to stop him, but Que manages to hold him back. Megatron tries to intervene as well, but Optimus tackles him. The space bridge opens and Cybertron is removed from the solar system again, sent back where it came from.

Enraged beyond measure, Sentinel rips free of Que’s grip and shoots the other scientist, mortally wounding him. Aghast at his own actions, though, he can’t stop Que from firing off one final shot, destroying the space bridge control pillar. Outside the Nemesis, having been boarded by the Wreckers, begins to topple from the sky. Megatron, seeing all his plans fail, attacks again, but Prime finally defeats him for good, leaving him crippled on the floor. Megatron laughs, though, promising Prime that he will never give up, he will see this world destroyed if it’s the last thing he does. Optimus looks down on him, seeing the carnage around them, sighs heavily, and says “I believe you.” He then shoots Megatron in the head, killing him. Outside the survivors gather, surveying the destroyed city. Most of the Decepticons have been destroyed in the crash of the Nemesis, the stragglers are being hunted down as they speak. Lennox says that he has received strict orders that, this time, they will be taking no prisoners. Too many lives have been lost, the prison (from my version of part 2) didn’t work, the only way is to make sure there are no more Decepticons left. Prime looks broken at this, but finally agrees, even as he sees a defeated Sentinel Prime being loaded onto a trailer by NEST personnel.

Closing monologue of Optimus Prime as the survivors embrace, but look forward into an uncertain future: “For a long time I wanted to see this war end. When I first took up arms against Megatron, I didn’t know whether we would prevail or be defeated. Now the war is over… and I still don’t know. Our war has rendered our own world lifeless and caused so much damage to this one. Of our race, only so few are left. We remain here on Earth, for good or ill, lacking any alternative. What the future will bring, only time will tell.”

Final scene sees the camera zooming away from Earth and across the universe to where planet Cybertron emerges from the space bridge. A strange ship (Lockdown’s vessel) passes the planet, scanning it for life signs, but finding none. The ship flies on, continuing its search.