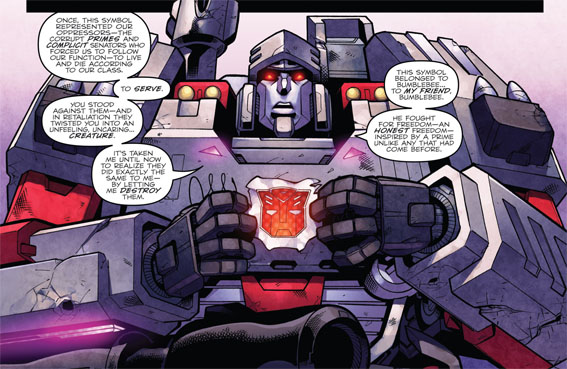 When it comes to Star Trek movies there is no beating Star Trek II – The Wrath of Khan, but the one movie that came very, very close for me was Star Trek VI – The Undiscovered Country. As the Cold War ended in the real world, this movie asked the interesting question: does the end of a war automatically mean peace? And it provided the answer, too: no, just because the fighting is officially over does not mean all is well. Ending a war is oftentimes far, far easier than winning the peace.

IDW comics, who ended their version of the Great War with the Chaos Event, has explored the aftermath of the war ever since. You have disgruntled soldiers on both sides who refuse to lay down their arms or don’t know what to do with their lives now. You have a vast population of neutrals who are not happy with either side and just want to rebuild their civilization. Then there is Starscream, who has managed to manipulate said population and got himself elected king of Cybertron, his ambitions only barely held in check by newcomer Windblade. And there is Optimus Prime, of course, who struggles to find a new place in this world, where half the Transformers regard him as a war criminal while the other half regards him as a deity. Most interesting, to me, is Megatron, however. When he was first made into an Autobot at the end of the Dark Cybertron arc I did not expect much of it. It came too quickly after his latest bid to conquer the planet and there seemed little reason for him to change. Him joining the crew of the Lost Light in order to find and be judged by the legendary Knights of Cybertron seemed little more than a plot contrievance to get him onto the ship. Ever since then, though, Megatron has surprised me, which is mostly due to how writer James Roberts has handled him in the More than Meets the Eye series. In a beautiful character scene with Ravage, for example, he ponders when exactly he became a monster and, more importantly, when stopped caring about being a monster.

And more recently there was a tremendous scene when the Lost Light crew stopped on the planet of the Necrobot. The Necrobot has taken it upon himself to record every last death of the Cybertronian race. Every living Cybertronian has a holographic statue upon this world and when they die, the Necrobot switches the hologram off. Megatron learns that the Necrobot also plants a techno-organic flower for every Cybertronian killed and he plants them at the foot of the statue of the killer. Megatron visits his own statue then… and is stunned at seeing it standing in the middle of a vast field, surrounded by millions of flowers. Not a single word is spoken, but the image of a despondent Megatron, standing alone in a sea of flowers (aka corpses) clearly conveys that, maybe for the first time ever, he actually realizes how many lives he has destroyed.

The hardest thing for any story writer is to make the readers care about the characters, especially the bad guy characters. For most of his 30+ year career as main bad guy in the Transformers franchise, Megatron has been little more than the stereotypical would-be conquerer. Powerful, evil, occasionally brilliant, oftentimes cool, sometimes ludicrous. James Roberts has managed, though, to give Megatron a believable back story as the disgruntled miner who saw his attempts at peaceful revolution crushed and finally concluded that violence was the only answer, only to be utterly corrupted in the process. And he has also managed to get Megatron started on the first shaky steps towards redemption. Will it work? Will this great character arc reach a satisfying conclusion? I don’t know yet, but I do know I’ll keep reading. Which, I guess, is the biggest compliment a reader can give to a writer.