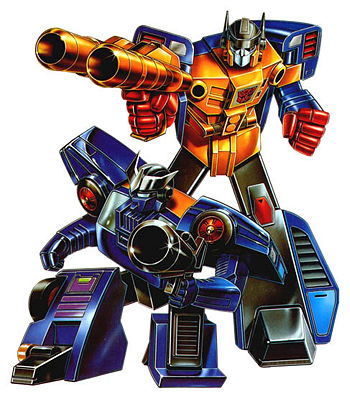 Every once in a while you wonder what might have been. What great story-telling or character-development opportunities briefly teased at your imagination, but then failed to materialize. Today we are looking at one such opportunity.

Punch was an Autobot undercover agent infiltrating the Decepticon ranks under the name “Counterpunch”. He briefly appeared in the 1987 cartoon episode “The Rebirth, Part 1” were he did little but advertise his then-current toy. He played a slightly bigger role in the Japanese Headmasters cartoon, where he regularly reported on the activities of the Destrons and Scorponok to Cybertron leader Fortress Maximus. But apart from being a spy with a second robot mode we still learned very little about Punch / Counterpunch.

Finally the More than Meets the Eye profile series by Dreamwave hinted at a much more interesting version of Punch. It described him as being a cool and competent guy on the surface, but a nervous wreck on the inside, always in terror that his cover could be blown. It also described him as being so paranoid that he developed an entire full-blown personality for his “Counterpunch” cover, to the point where his behavior changed completely the moment he assumed his other robot mode. Finally, it hinted at a deep-seated psychological problem where the Counterpunch persona slowly begins to develop a life of its own, a way for Punch to indulge his darker urges while keeping himself utterly separate from them.

Sadly neither Dreamwave nor the current IDW comics ever picked up on that. Imagine a story set in the current IDW comics universe, where the war is pretty much over, and amidst a horde of other characters already struggling what to do now you have Punch, basically James Bond with multiple personality disorder, looking to rid himself of the now-unnecessary Counterpunch persona. Counterpunch doesn’t want to go, though, setting the stage for a full-on Fight-Club-esque sequence of events where the two personalities strive for dominance. I don’t know about you, but I would certainly buy a Spotlight issue or mini-series featuring that.

To this day, though, Punch / Counterpunch remains one of the most underutilized Transformers characters of them all.