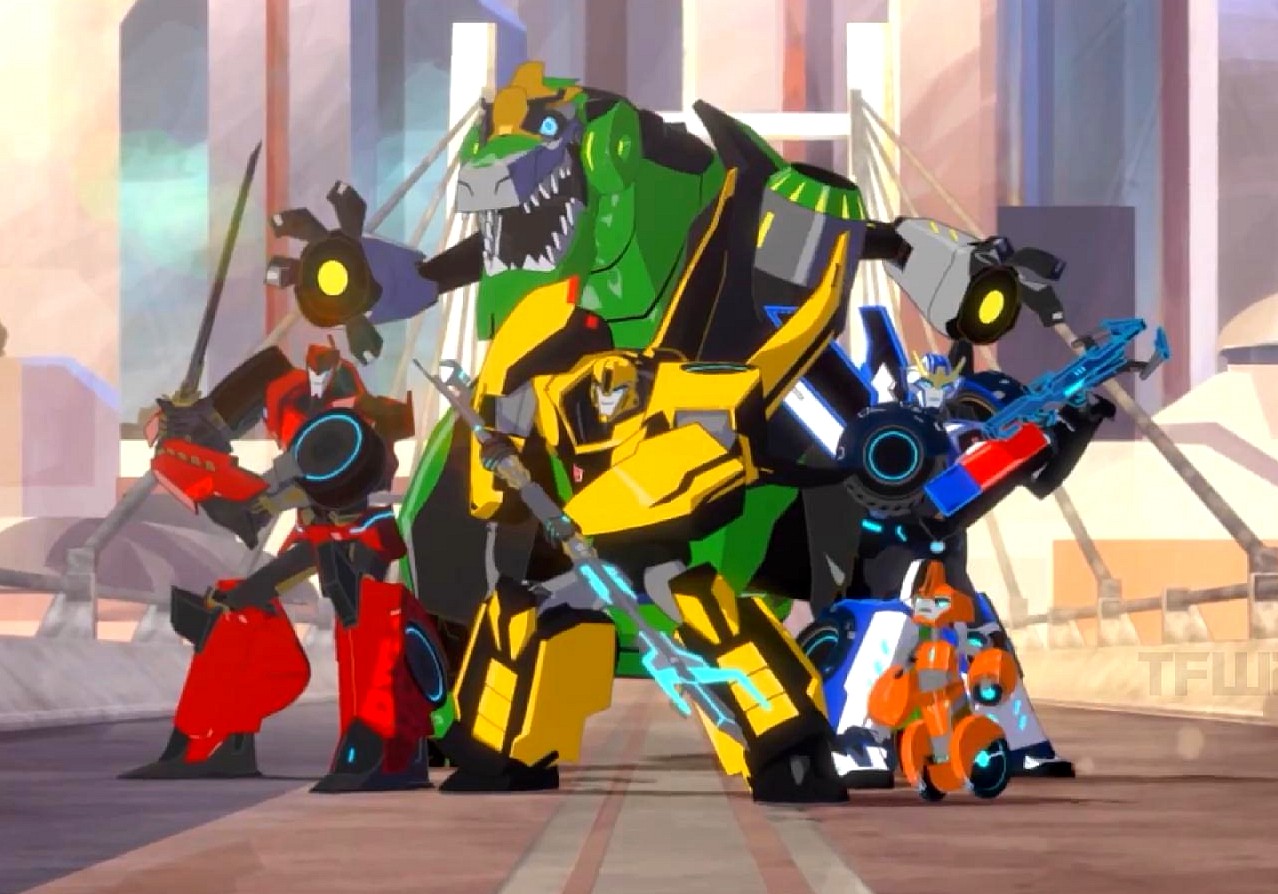 The first season of the new Robots in Disguise series is history, so it’s time to take a look back. Despite being a sort-of sequel to Transformers: Prime, this new series differs a lot from it, both in tone and target audience. Where Prime was dark, broody and full of doom and gloom, RID goes the opposite route, being a brighter, funnier, more upbeat series for a younger audience. As a result many people who liked Prime can’t stand the silliness of RID, while many other people – like myself – who think Prime was trying way too hard to be awesome and badass, consider RID a breath of fresh air.

The following is full of spoilers for RID season 1, so continue reading at your own peril if you haven’t seen it yet. Also, I’m not going to give a play-by-play of the episodes, just looking at the overarching plot and characters.

Like most of the recent Transformers series RID starts of with the traditional five man band as the main good guy cast. You have Bumblebee, the leader, thrust into a position of command he is not really sure he is ready for when the spirit of Optimus Prime warns him of a grave threat on Earth. Then there is Grimlock, the big guy, a former prisoner looking for probation. Fixit fulfills the part of the funny little smart guy, providing technical support and knowledge of the bad guys. And then you have Strongarm and Sideswipe, basically two siblings who are running their adult guardian (Bumblebee) ragged with their constant arguments.

As the season progresses we see this more or less accidental team come together. Bumblebee finds he doesn’t need to do everything like Optimus Prime did, he can lead in his own style. Strongarm, the walking rule book, learns that sometimes it’s okay to bend or break the rules. Sideswipe, the rebellious teenager stereotype, begins to respect the others. Grimlock, a Dinobot who loves smashing things, becomes a valuable member of the team as well. And Fixit, the damaged little Minicon, finds a trusted friend in human sidekick Denny and enjoys being part of a team instead of being stuck alone guarding a prison ship.

Additional characters appearing are Drift (a somewhat humorous take on the stereotype of the Japanese Samurai master) and his two Minicons Jetstorm and Slipstream, Transformers mainstay Jazz (who is Jazz as always) and newcomer Windblade, who is on a mission from Primus himself. Drift and Windblade end up jointing Team Bumblebee in time for the big finale. The season begins with the crash of the prison ship Alchemor and over a hundred of Decepticon prisoners being released on planet Earth, most of them animal-themed for no in-story reason. While many episodes feature the standard hunt for the con-of-the-week, a core cast of bad guys slowly begins to coalesce around leader Steeljaw (which is actually the first time a Western Transformers series had a main bad guy not called Megatron or Galvatron).

Personally I very much enjoy the smooth-talking Steeljaw, especially when he looses his cool and gets really pissed. Of course late in the season we learn that there is a (supposed) bigger threat behind the crash of the Alchemore, the powerful Megatronus (aka The Fallen, though this name is never mentioned in the series). This is the threat Optimus Prime has foreseen and is training to go against. In the season finale, though, Megatronus is quickly overcome by Team Bumblebee and Optimus Prime, while Steeljaw, the supposed minor threat, escapes to scheme again. It’s a nice swerve, I think, that the ominous, supposedly all-powerful super threat everyone spouts omens of doom about is dealt with so quickly, while the side effect (Steeljaw being freed from the prison ship) will apparently turn out to be a bigger threat in the long run.

No Transformers series without human sidekicks, of course (at least not since Beast Machines). In this case we have scrap yard owner Denny (who considers his scrap yard a “vintage salvage depot for the discriminating nostalgist” a la American Pickers) and his son Russel, who is staying with his dad over the holidays. True to form they encounter the Autobots early on and offer them a place to set up shop. Over the course of the series Denny forms a close friendship with Fixit, to the point where he is the only one Fixit trusts to perform repairs on him, while Russel…, well he’s the kid sidekick of the Autobots. There is (almost) always one, I guess. Personally I like Denny and am kind of neutral on Russel so far.

Other human characters have appeared only very sporadically so far, including generic citizens of Crown City (the only city on planet Earth, apparently) and a couple of kids Russel plays Football with now and then. A good thing, mind you, as the focus of the series is fully on the Transformers and their two human friends instead of too many human characters pushing the Transformers into the background (I’m looking at you, live-action movies).

While a lot of the episodes, as mentioned above, center on hunting down the escaped con of the week, there is also a message of some kind involved in most of these. Remember, this is a series for kids. So while hunting down the Decepticons, the Autobots learn about things like team work, dealing with your worst fears, the values of growing up, or other valuable life lessons. For the most part it’s about helping Team Bumblebee come together properly (and teaching the viewing kids a lesson or two as well, of course).

The overarching plot, the threat of Megatronus, barely matters until the very end of the season, whose main purpose it is to establish the characters and their teamwork. This is somewhat similar to how Transformers: Prime brought out Unicron for the season one finale and basically destroyed him right away, then continuing with less cosmic, more down-to-Earth threats. I like it, considering that the Megatronus threat really didn’t fit well with the tone of the series, thus ending him quickly and having it turn out that the whole big threat thing was basically just the prelude for the far messier, long-term mission of recapturing over one hundred Decepticon criminals on Earth. Looking ahead to Season 2

The potentially most interesting group dynamic is hinted at in the finale, with the big threat defeated and a resurrected Optimus Prime joining Bumblebee’s team, not as a leader, but rather as an equal. Seeing how Bumblebee will handle being leader in the presence of his mentor could turn out quite interesting for season 2. Also, I hope we’ll see a more laid-back, less serious Optimus Prime now that he is no longer Autobot leader and thus contractually obligated to be all gloomy and angsty.

As for the rest, we will probably see the return of Steeljaw, putting together a new Decepticon army to give more trouble to the assembled Autobots. Also, it has been hinted by the creators that some of the Transformers: Prime cast will return in season 2. Personally I hope to see Arcee again, my number one favorite character from Prime. Also worth a mention: a lot of the RID toys announced for 2016 have an arctic redeco, so maybe a prolonged polar mission will be part of season 2 as well. We’ll see. I know I am probably in a minority here, but I have enjoyed Robots in Disguise far more than I did Transformers: Prime. RID is definitely targeted at a younger audience than its predecessor and places far more emphasis on fun and characters than big epicness, G1 callbacks, and formulaic wow moments. It’s not for everyone, certainly not for those who want their Transformers to be all about how bad ass everyone is. But for kids and adult fans who have retained their inner kid, RID is a lot of fun to watch. I personally am looking forward to season 2.