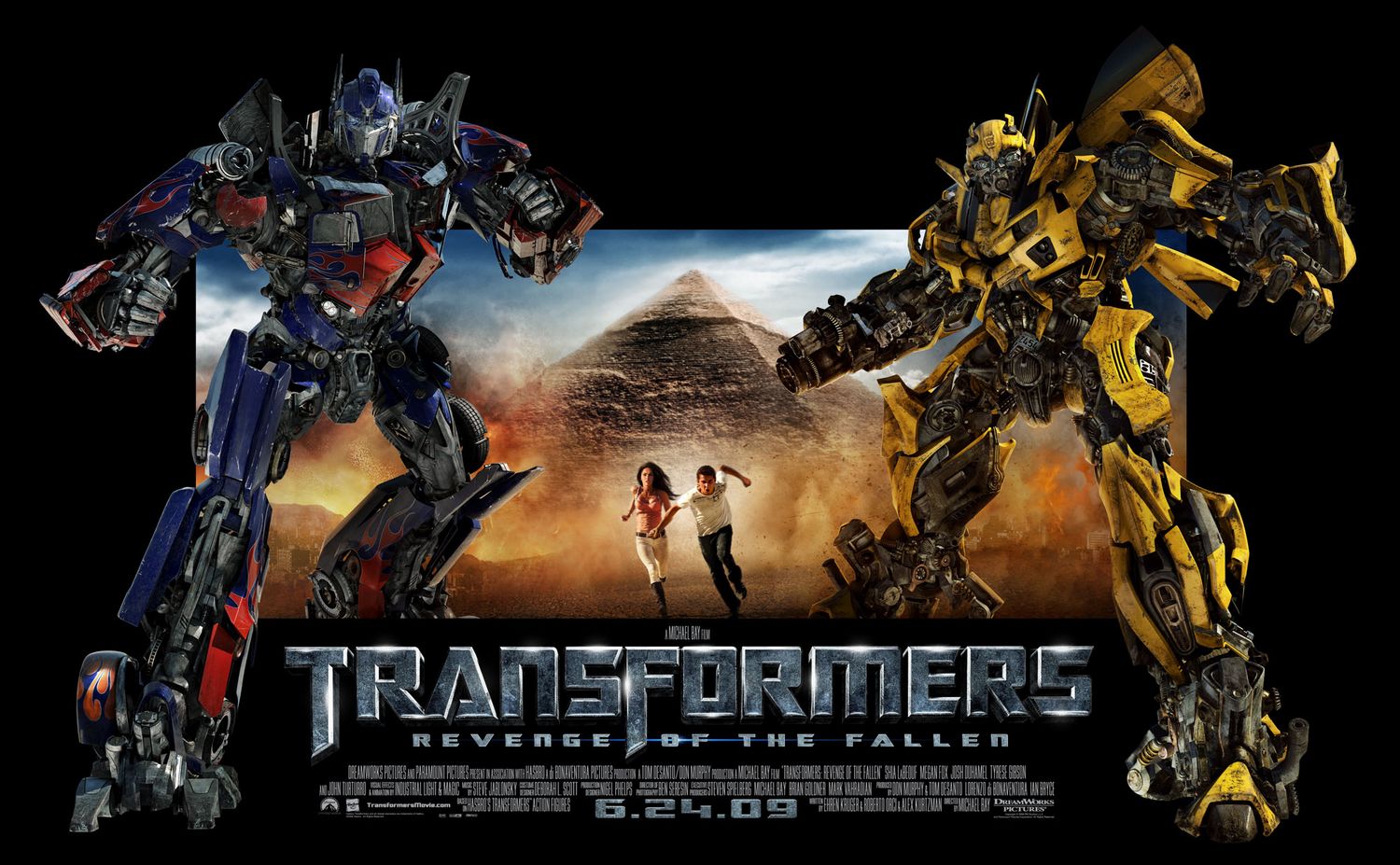 After the first live-action movie featuring the Transformers performed well and got relatively positive reviews (for a summer action blockbuster), a sequel was quickly green-lit and put into production. Unfortunately said production fell right into the time of the big Hollywood writers strike and thus was born what is widely regarded as the worst of the Transformers live-action movies, Revenge of the Fallen. Sure, it made tons of money, but even the most die-hard Michael Bay fans usually admit it was a disaster. There is a brilliant article on io9 about the movie actually being an art project about the non-existence of sense and plot and how everything in the world changes and transforms without rhyme or reason.

Sure, in typical Michael Bay fashion the rest of the film is filled with things exploding for no discernible reason, weird racial stereotypes shouting at you while hot babe extras are gyrating, the US military shows off its gear, and everything is tinted either orange or blue. I think, though, that with an actually finished script (and a director willing to follow it instead of looking for the next money shot), Revenge of the Fallen might well have been a good movie.

Here is what I would have done with the material: The opening battle in Shanghai happens as before, though we actually see a battle between robot mode Sideways and Sideswipe and the Arcee triplets. Also, the Decepticons are beaten, but not executed on the spot. Instead the NEST team transports them to a specially constructed holding facility, which is already filled to the brim with Decepticons. Exposition that more and more of them seem to be arriving on Earth, apparently following the summons of Soundwave. Soundwave is on board the Nemesis in orbit, scanning the globe for signs of the Allspark. Next to him is a strange sarcophagus with the Decepticon symbol on it.

Enter Sam Witwicky, now enrolled in college, still together with Mikaela. No appearance of Sam’s parents, no hash brownies, no idiot room mates. Sam has nightmares about the final battle in Mission City and the unleashing of the Allspark energy into Megatron. Still sleeping, he doesn’t notice energy spilling from his fingertips and turning his alarm clock into a tiny Transformer, who just walks off, causing him to oversleep. Late to class, he falls asleep and, when started awake, finds he has doodled strange Cybertronian glyphs onto his notebook.

Telling Mikaela about it, the two of them head over to NEST headquarters and meet Lennox and the Autobots. Ratchet scans him and finds residual energy with a signature similar to the Allspark on Sam. They theorize that, since energy cannot be destroyed, the Allspark Cube’s energy is not gone, but rather inside Sam somehow. Unbeknownst to them, the conversation is overheard by Ravage, whom Soundwave has sent to infiltrate NEST headquarters. Soundwave mobilizes a team of Decepticons.

On their way back home, Mikaela and Sam are ambushed. Bumblebee (their car) does his best, but can’t keep them from taking Sam. Being transported to an abandoned factory, Sam sees that the Decpticons have apparently salvaged the remains of Megatron. Soundwave has the Decepticons wire Sam into a strange contraption and even as the Autobots arrive outside to rescue Sam, the energy is transferred and Megatron is revived. In orbig aboard the Nemesis, the sarcophagus begins to subtly glow, a voice announcing that it is almost time. Mid-Movie battle scene commences as the Autobots attack the factory to rescue Sam. The battle spills out into the nearby forest and Optimus and Megatron face off. Optimus holds his own at first, but – guided by a strange voice – the other Decepticons all converge on him with little regard for their own survival and eventually bring him down. Optimus Prime is dead. In orbit on the Nemesis, the sarcophagus shatters and The Fallen emerges, on fire, announcing that the last of the Primes is dead and he is finally returned.

As the Autobots lick their wounds and mourn their fallen leader, the Fallen single-handedly assaults the containment facility and frees all the Decepticons inside. The Autobots are shocked to see that even Megatron bows to the powerful newcomer. The Fallen announces that the war is over and it is now time for Cybertron to be reborn. The massive Decepticon force heads to Egypt and takes over the area surrounding the pyramids.

Trying to find out more about the Fallen, NEST consults with Agent Simmons, who goes through the records of Sector Seven. Signs of Cybertronian presences were found in ancient Egyptian temples, including the face of the Fallen. Apparently at some point roughly 5,000 years ago the Fallen was on Earth and some sort of battle took place. Simmons plans to consult an expert and leads the Autobots and Sam to an old Sector Seven hangar, where they have stored all sorts of artefacts and machines suspected of being of Cybertronian origin. This includes an SR-71 Blackbird jet, whom they suspected of being a Transformer, but could never figure out. Ratchet identifies the jet as a Transformer in stasis lock and repairs it. Jetfire awakens.

Jetfire gives exposition on the Fallen, his battle against the Primes, and how Egypt is the location of a machine used to syphon energy from a living star to repower the Allspark Cube. With no one left to stop him, the Fallen will do just that with Earth’s sun. Jetfire says only a Prime can defeat the Fallen, but with the last Prime dead, there is no hope. Sam wonders whether the energy of the Allspark can do for Prime what it did for Megatron. In Egypt the Decepticons have unearthed a giant machine from inside one of the three pyramids and are busy repairing it. The Autobots and NEST carefully approach with the lifeless Optimus Prime in tow. Autobot spy Wheelie infiltrates the area and finds the syphon Soundwave used to suck the remaining Allspark energy out of Sam and there is still energy left inside it. A big assault by NEST and the Autobots provides a distraction, allowing Sam, Mikaela, and Lennox, riding the three Arcee motorcycles, to sneak in and steal the syphon.

As the battle rages, the Autobot and NEST forces are hopelessly outnumbered by the vast Decepticon army, which includes both the combining monster Devastator and the apparently all-powerful Fallen. Megatron is not happy with being relegated to second in command, though. A brief flashback shows him back on Cybertron, discovering the sarcophagus of the Fallen and promising to free him from his extra-dimensional prison in return for making him ruler of Cybertron. Now Megatron wonders if the Fallen intends to keep his promise. The Fallen suddenly stumbles, though, as he feels the power of a Prime nearby.

Optimus is brought back to life and his mere presence brings new hope to the struggling Autobot lines. Ironhide and the Arcee triples manage to bring down Devastator. Lots of things explode and we see tanks and jets and more US military porn. The Fallen orders Megatron to kill Optimus, but Megatron refuses, telling Fallen that – if he wants to be leader – he should be able to do his own killing. Big final battle Optimus against the Fallen with Optimus prevailing and killing the Fallen. With his dying breath, though, the Fallen activates the Sun Destroyer and a bright beam of energy lances into the sky. Megatron calls for the Decepticons to retreat to the Nemesis, as the sun will soon explode. Optimus has Ratchet analyze the machine, who finds out that this is but a relay, the actual Sun Destroyer is in orbit around the sun, far out of their reach. Until, that is, Jetfire uses the last remnants of the Allspark energy and forges a combination between himself and Optimus. Now powered-up, Optimus launches into flight and jets towards the sun, destroying the Sun Destroyer before the sun takes lasting damage.

The epilogue has Ratchet scanning everything for remnants of the Allspark energy, but it seems to be all gone from both Sam and Optimus. Sam and Mikaela embrace in front of the setting sun. On board the Nemesis Megatron and Soundwave ponder what to do now, with the Fallen destroyed and the Allspark lost forever. Megatron says there are already contingencies in place and more than one way to revitalize Cybertron. The Nemesis sets course for the dark side of the moon.