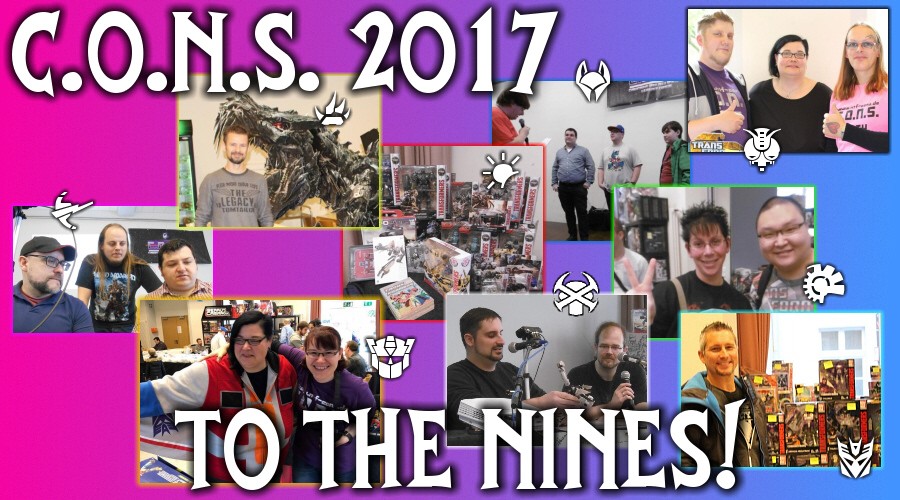 Nine is kind of a strange number, isn’t it? What can you do with a nine? It’s not quite a ten, tough luck, and ninth parts are usually … well, for one thing very rare and usually not that good. Star Trek IX – Insurrection? Terrible! James Bond 9 – The Man with the Golden Gun? 70s kitsch extreme! And let’s not even mention the ninth parts of other movie series that made it this far (Godzilla, Hellraiser, Friday the 13th). So the fact of the matter is: A nine behind the title isn’t usually a sign that you can expect something extraordinary.

On October 8 the ninth annual CONS took place, for the ninth year in a row we had a German Transformers Fan Convention and … eh… ninth times the charm? No, let’s try that again. We … eh … nine time World Heavyweight Champions? Wooo!? No, doesn’t really fit, either. Damn, there are no good wordplays with nine. And not even our attendance number was willing to lend a hand here. We had 648 visitors. Okay, it’s a new record, again, but is there a nine in there? No, there isn’t! There’s nothing you can with a nine!

Okay, let’s stop it with the nines, let’s look at the convention. It was great! One might be tempted to say, we took it to the nines. Hey, there is a wordplay with nine in it right there. But back to the convention. We were in Viersen once again, just like last year, and for the fourth time in a row (sadly not the ninth time) we had CONS veteran John-Paul Bove as a special guest. He had brought along his colleague Jack Lawrence, artist on the current IDW Lost Light comic book. John and Jack gave us insights into the world of comic book publishers, such as the fact that James Roberts is, in fact, pure evil. Oh, and Raymond-T, who has been a Transformers fan for so long his beard has grown past his knees, was incapable of recognizing a drawing of Rodimus. Well, we all have our Achilles heels, I guess.

We also had a live review on stage, this time with German video reviewer Reyjin along with Yours Truly. Reyjin did the actual reviewing of the Last Knight figure Nitro (with our without Zeus behind it, that’s between you and your god), while I did a superb job of doing simultaneous translating into English. Well, almost simultaneously and superbly. Very nearly so. Oh well, at least our English-speaking guests did learn that Nitro has WHEEEEEELS in jet mode, which is something at least. And, of course, that he is a pretty cool figure, which was sadly already sold out at all vendors present. But at least there was still one in the raffle.

Speaking of the raffle: last year Sideswipe managed to score top place as unnervingly overrepresented character in the raffle, but this year multiple-time champion Bumblebee was back in first place and took on all comers. At least ninety-nine Bumblebees were given away (hey, I have to take my nines where I can get them!), quite a few of them to vendor Teletoys (who bought a lot of tickets, though, so it’s fair) and NTF member Tobimus Prime. The latter also managed to score our grand prize, a Maketoys Devil Stinger. Tobi, we are still waiting on that picture of the unboxed Devil Stinger! Get to it!

A few people might remember my report from last year where I was telling people to bring some guts this year and participate in the live quiz on stage. Well, that worked really well and by really well I mean: not at all! It took multiple encouragements bordering on public shaming to get two challengers up on stage to face the only person who had the guts to go up there by himself. But fair is fair, once we started the Transformers trivia came hard and fast.

What else is there to report? Well, apart from the usual organizational hurdles up front and a few additional obstacles, courtesy of German bureaucracy at its finest, we sadly had to do without Hasbro’s presence this year. Originally it was planned for them to have their own booth at our convention, but unfortunately it all came to naught. But again, this was just the ninth part. Next year for our tenth anniversary we’ll give it another go. Keep your fingers crossed!

Which takes us directly to our glimpse into the future: next year we will hold CONS for the tenth time (no more stupid nines!). For the tenth time Lucy and Alex, along with a small group of dedicated people with questionable sanity, will do their utmost to present German Transformers fans with a unique experience. Lots of thanks once again to Lucy and Alex, as well as all members of the team. What? Yeah, that includes me, so what? Yeah, self-praise stinks to the nines! Hey, another nine right there!

We hope you all had fun at CONS number nine and will all be back in even greater number for next year’s anniversary CONS. As we saw this year, it is well worth the price of admission. Not just because of the money to be earned and/or spent, not just because of the many Transformers figures that changed hands, but first and foremost because it was a day of great fun, just like always. And be honest: how many other ninth parts do you know that were fun?

See you again next year!
Yours Truly, Philister!