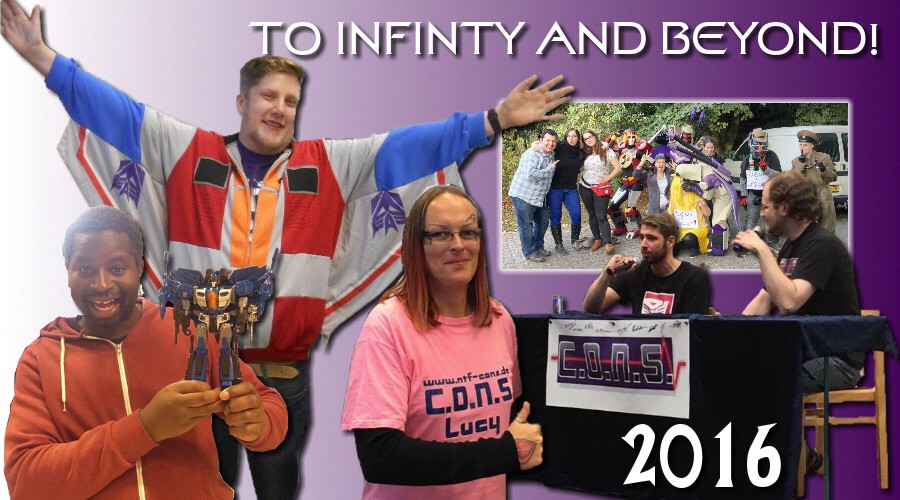 Do you know how hard this is? No, I’m not talking about organizing a Transformers Fan Convention in Germany. We’ve done that eight times, we know how it works by now. No, I’m talking about writing a report about the CONS for the eight time. Here I am, sitting in front of a blank piece of paper (digitally speaking) and need to find a way to compress a day full of fun, excitement, and passion into a few paragraphs and all without repeating myself. This is starting to become a real challenge, people! But I accept it. Have a Sideswipe!

Eight long years! Eight years ago it was unthinkable that Germany could host its own Transformers Fan Convention. Only a small group of strange fans in a small online forum were deluded enough to think it might be possible. And now here we are eight years later and the CONS is a fixture of Transformers fandom. More than that, after suffering the seven year itch last year, this year saw us firing on all cylinders again. The previous attendance record from 2014 (538 attendees) was pulverized as no less than 602 fans turned up for CONS. A new European attendance record for a Transformers Fan Convention. Have another Sideswipe!

A lot of things were improved this year. The attendance numbers rose. The location was new and bigger (just like the serving of French Fries, tasty!). Your humble moderator managed to avoid his traditional pre-CONS-cold (and threw his back out instead, but you can’t have everything). And finally, after eight years and a few failed starts, we finally got a representative of Hasbro Germany to attend. Mr. Lohmeier, newly responsible for fan relations for the Transformers brand, dared to mingle with the fans. He weathered the bombardment of critique and questions from fans of all ages (“Why do the Transformers have so little color?”) and even though he couldn’t answer all of them to our satisfaction – what with Hasbro Germany being solely about distribution, something we were told at least four times, I think – he did a pretty good job overall. We didn’t quite manage to make him cry, but one does need to set goals for next year after all. By the way, Mr. Lohmeier agreed to a permanent discussion thread at NTF-Archive.de where he will collect questions and suggestions for Hasbro on a permanent basis. Have another Sideswipe!

Another first this year: our live quiz up on stage. Here, though, one must say with reservation: shame on you, adult Transformers fans. None of you had the guts to step up on stage and have your Transformers knowledge tested. It fell to two very young fans to dazzle us with their broad knowledge and wild enthusiasm. So much so, in fact, that we saw no alternative to awarding them both a prize. Nicely done, boys, and everyone else: shame on you! Bring some guts for next year if you please! Otherwise people might get the idea that Transformers are actually meant just for kids. Have another Sideswipe!

And while we’re on the topic of quizzes, I fear I must apologize. Apparently this year’s quiz sheet was far, far too easy. No less than five people managed to answer all questions correctly and it was then up to John-Paul Bove, who attended CONS for the third year in a row, to draw the winner of our sole prize for this contest. Congratulations to everyone, especially the four people who answered everything correctly and sadly lacked that tiny little bit of luck to be drawn as the winner. I hereby solemnly swear to make it much, much harder for next year. Many thanks to John-Paul Bove here as well. Not only did he come for the third time, as I said, he also did a live presentation of what it is a colorist actually does for a comic and showed us how much work it really is. Nicely done, John-Paul, and we promise that, should you grace us with your presence again next year, we’ll find a better projector, too. Have another Sideswipe!

And thus we come to the big thank yous. Thank you Lucy & Alex for pulling it off for the eight time. Thank you to all our great attendees, not only for showing up in such large numbers, but also for making it such a fun and exciting day for us all. Thanks to Mr. Lohmeier, who admitted that even Hasbro employees sometimes earn Third Party figures and also for being the numbers girl at the raffle, drawing the winning number for our third party grand prize (not that often that Hasbro brings us luck, right?). Also, a very, very big thank you to everyone who participated in the raffle, your combined feat of strength did the impossible: that huge, huge box filled with Panini comics (each of them with a tiny little Sideswipe) was actually empty at the end. Every single Sideswipe found a new home, none were left to wallow in that big box. So please clap your own shoulder here and have a final, well-deserved Sideswipe!

So what remains to be said? The eight CONS has left us with a feeling of optimism. Not only due to the many attendees, not only due to Hasbro finally attending, but mainly because, for the eight time in a row, it was a great, fun day for everyone involved. Attendees, vendors, the team, everyone had a good time. To everyone who thought we’d be slowing down with old age: you couldn’t have been more wrong. Full steam ahead, the tenth anniversary isn’t that far anymore. Can’t have another Sideswipe for that, none are left, but I’m sure we’ll find a Bumblebee somewhere to celebrate.

Signing off until next year,
Yours Truly, Philister