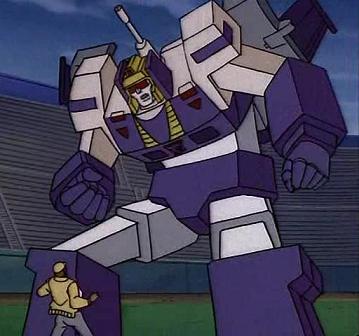 In the second season of the original Transformers cartoon we were introduced to the Decepticon Triple-Changers Blitzwing and Astrotrain, the first Transformers with two different alternate modes. Pretty much the first thing they did was try and ursurp Megatron’s command in the episode “Triple Takeover”, but Megatron was at that point pretty used to that, I guess, so he obviously forgave them. Blitzwing was portrayed here as the typical bad guy brute, all strength and very little brains. He even recruited a human football coach to help him with stragety (which, surprisingly, worked pretty well for a while there).

Fast forward twenty in-story years, though, and we meet a very different Blitzwing. The Decepticons have fallen upon hard times, their leader Galvatron is missing, and out of nowhere there are these strange alien creatures called Quintessons, who offer a deal that seems to good to be true: get all the Energon the Decepticons want in return for doing what they like doing best: destroy some Autobots. All the Decepticons are gung-ho for this with one noteable exception: Blitzwing. The former brute seems to be the only thinker left among the troops and distrusts the Quintessons. Why? Because he seems to remember meeting them before somewhere.

Sadly the cartoon offers no further details on this, even as it goes on to put Blitzwing through a great character arc that culminates in him switching sides and going against his leader in order to help Rodimus Prime save all of Cybertron in the final episode of the 5-parter Five Faces of Darkness. Sadly we never see Blitzwing again after this episode apart from being in some crowd scenes, where he was likely added simply to fill out the ranks. He was supposed to star in the subsequent episode “Starscream’s Ghost”, but the script writers had to replace him with a new Decepticon Triple Changer toy which was available in stores at the time, Octane.

So the cartoon leaves us with two big questions: what exactly happened to Blitzwing that made him remember and distrust the Quintessons and what happened to him after the finale of Five Faces of Darkness? While the latter is wide open, there are actually some hints as to the former. Enter Overcharge, an E-Hobby exclusive repaint of the G1 Blitzwing toy, and a text story from Transformers: Timelines, the continuity established by the Transformers Collectors Club. Here Overcharge is a type of Quintesson battle robot, based on Decepticon technology (because the Quintesson-built Cybertronians couldn’t transform originally, they developed that skill / technology later on their own) and looking very much like Blitzwing.

So there are two possible stories here: one, Blitzwing remembers the Quintessons because at some point between the second season of G1 and the beginning of season 3 he was kidnapped by the Quintessons in order for them to reverse-engineer his triple-changer technology, leading to the development of the Overcharge drones (possibly briefly seen in the season 3 opening sequence, though in Blitzwing colors). Blitzwing then either escaped or was released, possibly having his memory damaged or erased by the Quintesson experiments.

Second possible story: the Quintessons actually created the triple-changing technology (probably still based on stolen technology from the Transformers) and Blitzwing began life as just another Overcharge drone himself. It wouldn’t be the first time that a Quintesson-created robot developed a mind of its own (remember, all the Transformers in the cartoon started out that way). Maybe he escaped from them and joined up with the Decepticons, who then based fellow triple-changer Astrotrain on his technology without knowing where it came from.

Either way, the final fate of G1 cartoon Blitzwing remains undisclosed. Which is sad, because after Five Faces of Darkness there was loads of potential to turn him into one of the most interesting characters in the G1 cartoon world.