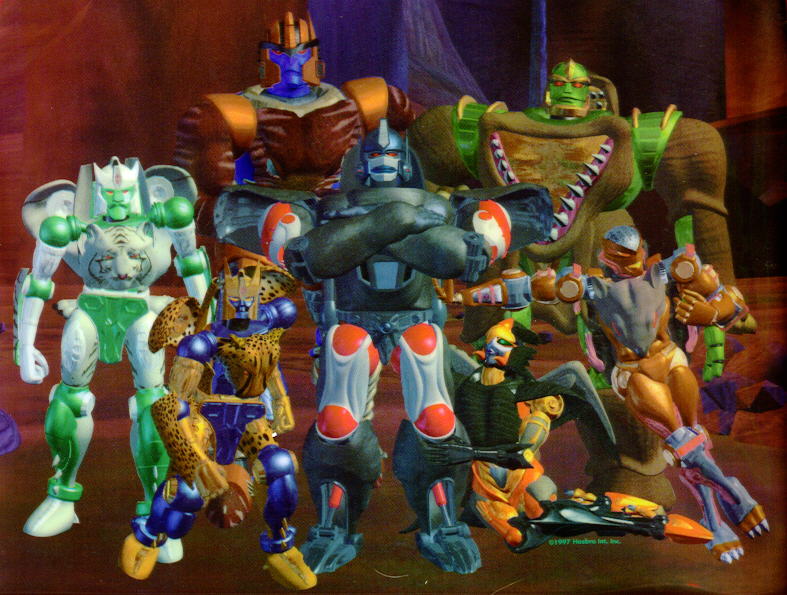 Beast Wars was, in my opinion, the best Transformers series when it comes to the quality of the plot and characterization. And here are my very own top 10 moments from the three seasons of the series:

(Season 1, Possession) A terrible Energon storm surges over the Beast Wars planet. Lightning flashes, thunder rumbles, and suddenly Waspinator is struck down and taken over by a foreign presence. In the glare of the lightning bolts a ghostly image is superimposed over him: it’s Starscream. The disembodied spark of the Decepticon has been thrown through time and space and has finally found a new body. The rest of the episode is only so-so, but that moment when Starscream appears sends goosebumps down the backs of every G1 fan. 09) Silverbolt and Blackarachnia admit their feelings

(Season 2, The Agenda Part 2) For quite some time the Maximal flying wolf and the Predacon spider have danced around each other. When the Maximals conquer the headquarters of the Predacons, it is Silverbolt that allows Blackarachnia to get away. Being put under house arrest, he escapes and tracks her down. But instead of fighting something entirely different happens between them.

Silverbolt: “I know what you’re thinking. You don’t know whether to kiss me or kill me.”
Blackarachnia: “I’m a black widow spider, you moron. I can do both!”

And then they do it. The kissing, at least. 08) Rattrap interrupts his own obituary

(Season 1, A Better Mousetrap) A malfunction of the Maximals’ security system Sentinel causes the heroes to be locked out of their own ship. Only Rattrap remains inside and has to work his furry little butt off, trying to deactivate the computer while evading dozens of traps. He is almost at the off button when a final trap activates. Outside the ship the Maximals only hear an ominous boom and the security system shuts down, making them believe that their comrade has perished. They mourn their lost friend and the screen slowly turns black…

… only to light up again as Rattrap exits the ship, crying fake tears as he admires the metaphorical flowers on his grave. (Season 3, Nemesis Part I) Megatron has found the Nemesis, the giant warship of his Decepticon ancestor. Depth Charge wants to destroy it before it can launch, but is caught in a battle against his archenemy Rampage, which carries them into a Energon field. A huge explosion kills both combatants and seems to destroy the ship as well. Optimus Primal mourns his fallen comrade, but is relieved as well. But then a huge shadow appears beneath the waves, the water breaks, and a mountain rises from below. It’s the Nemesis, undamaged and ready for combat. Majestically the ship rises into the air and the final battle of the Beast Wars begins. (Season 1, The Spark) Rhinox, the Maximals’ engineer, is on a solo reconnaisance mission when he sees a stasis pod come down in enemy territory. It crashes in a field of unstable Energon and the Maximal inside is in mortal danger. With help from Cheetor Rhinox does everything in his power to save the unknown comrade, including risking his own life. And when everything seems lost the stasis pod finally activates, scanning the form of an eagle. The new Maximal Airazor comes online, just in time to return the favor and save Rhinox from an attack by Terrorsaur. Rhinox’ iron-clad principles and readiness to do whatever it takes was never put on display any better than in this episode. (Season 1, Other Voices) The Beast Wars planet stands on the edge of extinction. The second moon is a weapon of ultimate sanction. There is only one hope left, a stasis pod refurbishes as a space craft by Tarantulas. Optimus Primal steers it towards the moon weapon, intending to detonate the pod’s transwarp drive to destroy it. Primal intends to safely eject beforehand, but finds that he is sealed in. Megatron has rigged the pod, the hatch is sealed. Primal is helplessly locked in as Megatron cackles in triumph. The pod explodes, the weapon is destroyed, and Optimus Primal is dead (well, briefly). 04) Waspinator has had enough!

(Season 3, Nemesis, Part 2) More than any other Predacon – or Maximal for that matter – Waspinator has been the Beast Wars’ whipping boy. He has been blown apart over and over again, nobody respects him, no one cares about what he wants. And as the series finale approaches Waspinator has had enough and tells Inferno and Quickstrike exactly what’s on his mind.

“Waspinator is sick of being evil! Sick of being Predacon! And Waspinator is more than sick of being blown to scrap all the time! So Commander suck-up and Two-Leg can pucker their mandibles and plant big, wet, dooky one on Waspinator’s big, fat, stripey…” and then they blow him to pieces. But Waspinator has the last laugh, because once the Beast Wars are over and all the other Predacons are either dead or captured, he remains behind, being worshipped as a god by the primitive humans. He is finally happy (well, for a time anyway) (Season 2, Transmutate) Rampage aka Protoform X is a failed experiment, a clone of Starscream’s immortal spark. Rampage is a killer, who only feels joy when he can cause others pain. But in the crippled, mentally handicapped Transmutate he finds a kindred spirit. He considers Transmutate a friend and tries to save him from the other Predacons. This brings him into conflict with Silverbolt, who also intends to save Transmutate, and the crippled Transformer is caught in the crossfire. As Rampage mourns, the other Maximals see a chance to taken down the powerful monster, but Silverbolt, who also mourns, stops them.

“Tomorrow we shall fight again. But today… today we are brothers.” (Season 2, Code of Hero) Dinobot was never quite sure where he belonged. He is a Predacon, but he has honor. He defects to the Maximals, but doesn’t really fit in with them. He knows of the Golden Disk, which holds a record of the future, and he ponders whether or not he is but a puppet of fate, his choices predetermined. As Megatron tries to change the future by annihilating humanity’s primitive ancestors, though, he finally comes to a decision.

“My question has been answered. The future is not fixed. My choices are my own. How ironic, for now I find, I have no choice at all. I’m a warrior! Let the battle be joined!”

In order to save the future Dinobot takes on six Predacons all by his lonesome. He beats them all, but is mortally wounded. As the other Maximals find him, the beaten Megatron flees and Dinbot is content. His honor has finally been restored.

“And the rest… is silence!” (Season 2, The Agenda, Part 2) Megatron stands with his back to the wall. His plans have failed, his troops are beaten, his capture just a matter of time. But the Predacon leader always has an ace left in the hole. He has found the Ark, the crashed ship of the Generation 1 Autobots. The Maximals try to stop him, but Megatron is first to reach the inside of the downed ship. And after a Shakespear-like monologue, which always manages to give me goosebumps, he confronts the stasis-locked Optimus Prime and shoots him in the head. History is changed. A terrible time storm is loosened, encompassing all the universe, and Megatron laughs, triumphant.

“History has changed! The Autobots lose! Evil triumphs! And you… YOU! NO! LONGER! EXIST!”

And scene, season two is over. Possibly the best cliffhanger ever in the history of Transformers on TV.